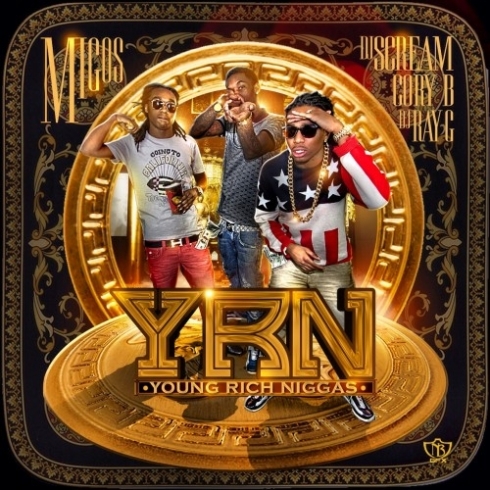 Fresh off the streets of Atlanta, the trap trio Migos burst on the scene setting the rap game ablaze with hit after hit in 2013. With Quavo and Takeoff functioning as duo for majority of the year (FREE OFFSET), Migos took the influences of the Trap God Gucci Mane and his 1017 coalition’s cocaine pushing Atlanta braggadocio accompanied with their rapid double-time flow defining the sound for 2013.

Majority of the world was introduced to Migos via Drake after the night a surprising remix of the already popular club anthem “Versace” fell from the sky; however, the streets were already aware of the already buzzing mixtape YRN (Young Rich Niggas). The allure of the young trap gods stems from their entertaining yet hilarious adlibs that are strategically placed to acquire reactions. “Brrrrrrr!” or “Chirp Chirp’s” are sprinkled throughout the entire tape and have proven to be just as important as a verse from the trio. Another component of what makes Migos so appealing are the infectious flows that they’ve patented on majority of their songs. In the twerk anthem of the year “Hannah Montana” Quavo uses his voice as an instrument mastering the art of repetition that hypnotizes listeners leaving them in a head-nodding trance. On the track “Cook It Up”, Takeoff spews off fast paced lyrics that are supposed to emulate how quickly he can move his wrist when whipping cocaine in a pot.

The Atlanta trio also takes their turn at more emotional and reflective pieces that pay respects to those who’ve passed away. “RIP” features Quavo and Takeoff trading verses back and forth reminiscing on those who’ve influenced them on their plight to fame (Damn, Rest in peace to Pimp C). Continuing their emotion transparency on the track “Thank You God,” The trio seems to be confused as to why the Lord has given them fame and money, but will make the most of their opportunities.

When reflecting back on 2013 it will be difficult to omit the influence that Migos had on the genre this year. Their impact had everyone standing on couches screaming “Medusa head on me like im ‘luminati.” From other prominent rappers trying their hand at “Versace” flow, to being featured on the legendary new nigga R. Kelly’s album Black Panties album Migos made rap music fun again with their intoxicating anthems. Serving as the score to ATL traps, the Migos are exactly what 2013 needed reminding hip-hop heads that good music can be made without being overly conscious.