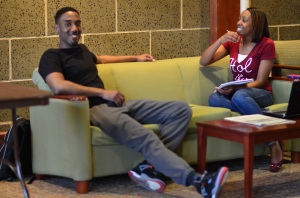 Photographer and upcoming graphic designer Larry Taylor Jr. or “LT” began photography only about a year ago and has since found that it is his passion. Born and raised in Lynchburg, Virginia, Taylor picked up his first disposable camera when he was only a small child and since then, he’s never looked back.

“I’ve been taken pictures with the cheap cameras all my life. I didn’t know what I was doing and I took a class at CVCC [Central Virginia Community College] about a year ago. I took Photo 101 and Photo 102. In Photo 101, we used film and in Photo 102 we were introduced to digital photography,” Taylor said.

Since 2013 Taylor has been featured in Photographer’s Forum: Best of Photography 2013 (pg. 195) as well as kept his skills current by shooting weddings, modeling jobs and various other events.

“I’ve done two wedding and I have a graduation party to do coming up. I also did some model  work in Baltimore,” Larry said.

For Taylor, he described photography to SDBUP as both a hobby and a potential career.

“This is something that I enjoy and I’ve had a lot of jobs that I didn’t enjoy,” Larry said with a smile.

Before his journey into photography, Taylor had and continues to have a love for painting and drawing as he sometimes paints pictures for his local church.

“I did an art instruction school and I finished up about a year ago. It gave me about 24 credit hours,” Taylor said.

Although Taylor clearly has a creative side, he has also served his country in the United States Air Force from 2009-2011 as a weapons loader on F-16 jets.